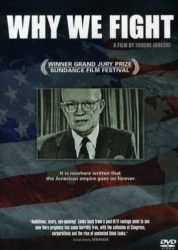 Why We Fight is a 2005 documentary film about the military–industrial complex directed by Eugene Jarecki. The title refers to the World War II-era eponymous propaganda movies commissioned by the U.S. Government to justify their decision to enter the war against the Axis Powers

Why We Fight was first screened at the 2005 Sundance Film Festival on January 17, 2005, exactly forty-four years after President Dwight D. Eisenhower‘s farewell address. Although it won the Grand Jury Prize for Documentary, it received a limited public cinema release on January 22, 2006, and then was released on DVD on June 27, 2006, by Sony Pictures Home Entertainment. The documentary also won one of the 2006 Grimme Awards in the competition “Information & Culture”; the prize is one of Germany’s most prestigious for television productions[ and a Peabody Award in 2006.  [