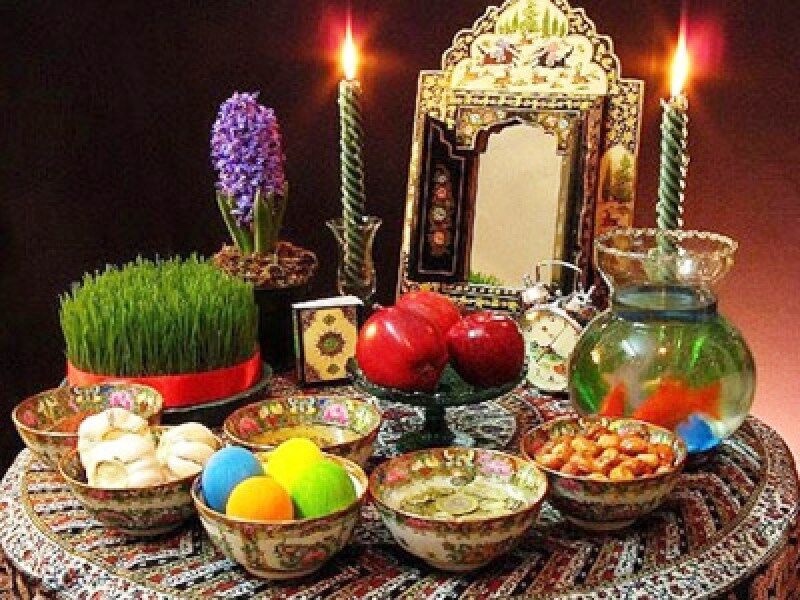 Let it fill you as if you were a sprout pot

Out of your hands.

The New Year will come,*

And you will sit

You will look in the mirror

And along with the red goldfish

You will be freed

From the confines of the fishbowl.

And you will pass

From the lonely oleaster,

And the happy silver coin.

And along with the bard of Shiraz*

You will be filled with the sound of love.

When the Thirteenth Day comes

You’ll go with the flowing water

And speak to the sky and the earth

Of the beautiful moments of love.

*- On Nowruz or the Persian New Year which coincides with the first day of spring, it is traditional to spread on a cloth seven items, the names of which all begin with the letter sin (“s”). These “seven s’s” are typically oleaster, hyacinth, garlic, vinegar, a coin, sprouts (wheat, watercress, or other), and sumac.  Other items put on the cloth (not beginning with sin) are a goldfish (in a fishbowl), a mirror, and either a Koran or a copy of Hafez’s collection of poems. Thirteen days later, in order to avoid bad luck, people must go out for picnics and cast their sprouts into streams.
*- An allusion to a verse of Hafez, the fourteenth century Persian poet.