An Anthology of World Poetry in Turkish Including Majid Naficy’s “Ah, Los Angeles” 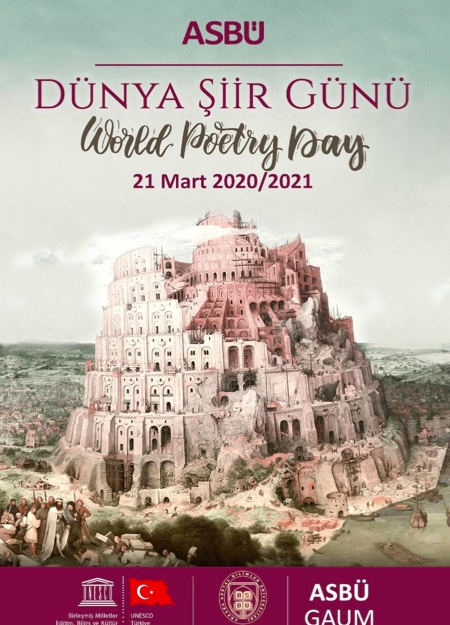 To celebrate the World Poetry Day, the University of Ankara, Turkey has published an anthology of 13 poems in their original languages as well as  their translations into Turkish and English, including poems by Publo Neruda, Mahmoud Darwish, Mohammad Hossein Shahryar and Majid Naficy.”Ah, Los Angeles is translated into Turkish by M. Bülent Kılıç.  The name of Majid Naficy is spelled in Turkish as Mecîd Nefîsî.(Pages 64-75)

Below you may readthe the English preface to the book:

UNESCO first adopted 21 March as World Poetry Day during its 30th General Conference in Paris in 1999 with the aim of supporting linguistic diversity through poetic expression and increasing the opportunity for endangered languages to be heard. Since then, World Poetry Day has been celebrated on March 21 every year to acknowledge and consolidate the common culture of humanity and pass on the world’s poetic heritage to the future generations. World Poetry Day, which has provided a strong platform for promoting intercultural dialogue and interactions since 1999, focuses on a different theme every year. In 2019, within the scope of the theme of preservation of languages determined by UNESCO, we made the first of this commemoration under the theme of “Writing and Living” at the initiative of the Faculty of Foreign Languages with the recital of various poems in different languages by ASBU members, the native speakers of those languages. We also brought out a booklet which included the English and Turkish translations of all the poems recited together with their texts in Turkish, Japanese, Arabic, Russian, Amharic (spoken in Ethiopia), Persian, xiii Chinese and English. With this booklet, including texts and translations, we provided an opportunity to the students, faculty, administrative staff and guests participating in the event to experience the shared feelings and thoughts of humanity through the equalizing power of poetry even though the poems were originally in foreign languages. Under the aegis of ASBU Global Migration Research Center, we planned to hold the event, World Poetry Day 2020, on March 21, 2020, to address the theme of migration, which has been one of the priority fields of study in the world, in our country and at our university. We are happy to engage readers with a selection of poems written on the theme of migration, in different territories, historical periods, and languages, on March 21, 2021 World Poetry Day. Through the chosen poems, we aim to accentuate how the issue of migration was dealt with by poets who lived in different parts of the world throughout history and how the common experiences reached us by transcending time and space boundaries. In this respect, we aim to share the literary heritage of humanity on migration with you. With the thirteen migration poems in this book written in Sumerian, Latin, Chinese, English, Turkish, Italian, Japanese, Adyghe, Spanish, Russian, Azerbaijani, Persian, and Arabic languages, which we have listed xiv chronologically, we aim to both celebrate the diversity of languages and draw attention to the various aspects of migration. We take this opportunity to place on record our profound sense of gratitude to the esteemed ASBU academics who keenly participated in the selection and translation of certain poems and also undertook a thorough review of the texts while preparing this book for publication. Let this selection help cultivate empathy with the people who have to migrate, who are forced to emigrate, and who see migration as the most suitable option; and let it also bring awareness, healing and mental enlightenment wherever it reaches! We hope the power of words will make it easier for people to establish lives blessed with joy, love, safety, peace, health, and prosperity wherever they choose or happen to live. We wish this wholeheartedly!