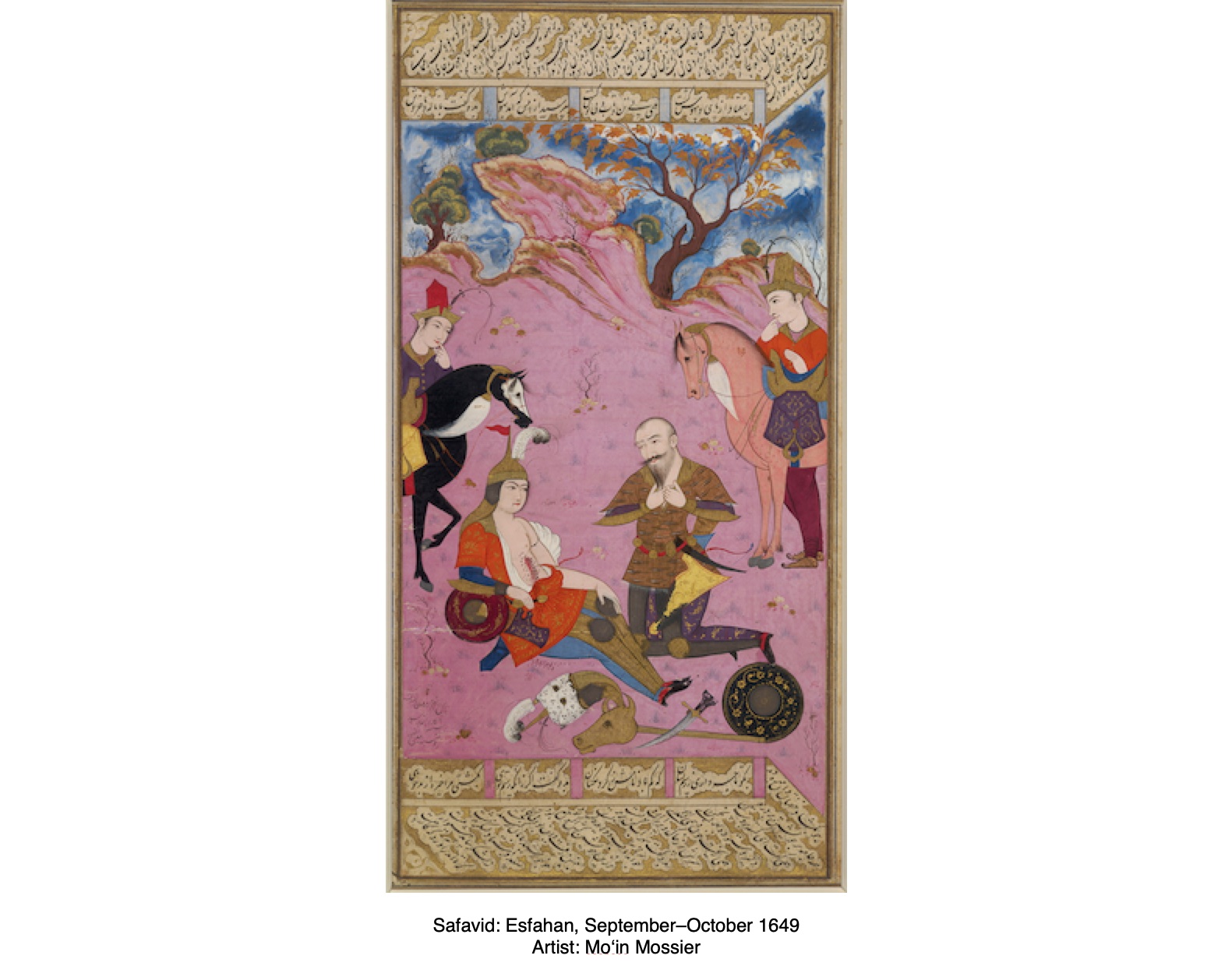 Whose uproar is this

Is this the cry of mourners going toward Razin Gate

Or the chime of a caravan coming from the gate of Rudbar?*

I will not go to the balcony

And will not open the casements.

Your poetry speaks to me

And the paper smells of you.

I will tell the scribe not to come here anymore

And ask the minstrel not to knock the door of this house again.

I want to be alone with you

Open the seven volumes of your poetry

And read from Faranak to Shahrbanoo,

Go with Rudabeh to the royal balcony

And let my hair fall toward Zal,

Kiss the lips of Siavash through Sudabeh

And burn completely in the flame of his love,

And speak of courage in love with him,

Take refuge among the shepherds with Farangis

And keep the memory of father in her son’s mind.

I am not Gordafarid to attack the enemy incognito

Nor Queen Homa to relinquish my son to the water.

I am your daughter, oh, bard of Iranian gentry!

I was raised with you and your poetry.

Every night that your double knocked on our door

It was me who would open the door to him.

I would climb the stairs hastily

And light the lamp in the balcony,

Put bergamots, pomegranates and quinces on the table

And fill up both your glasses with sumptuous wine.

Your gentle friend would open the Khodaynameh

And read a new story in old prose aloud.

Then he would stop, and you in the lamp light

Would recite the last week’s story in verse.

I would stand behind the balcony door

Listening to your melodic words

Which moved forward plot to plot like running water

And then suddenly covered the whole garden.

Then I would bring a lute and sit on the bench

Playing a sonata made by Barbad

Which suited to your poetry in the garden.

Long after midnight, your double would leave

And you would remain alone with a quill pen in hand.

From behind the door, I would  watch your shadow

You were bending over the notebook

Listening to the conversation of quill and paper.

And recite aloud a few couplets from memory.

Near dawn, you would extinguish the lamp,

Wash off your face and go to the garden.

You had put a new name on each tree

And called each flower with a nickname.

You caaled this sturdy sycamore: Rostam

And that sweet fig tree: Rudabeh of Kabul,

And that black maidenhair fern : Siavash.

Red flowers belonged to the Pishdadians

And yellow flowers to the Kianians.

Only this Kashmar cypress tree did not have a name

Which has grown next to the eastern wall

And every morning sweet-singing birds

Sat on its strong branches.

Sometimes, you would stand next to it,

You would look up at it and say:

“Oh, old tree! There is  no name for you

Or if there is one, you are the tree of spoken words,

And without them people cannot breathe,

Beautiful words which are free as air

And are not the inheritance of anyone,

Beautiful words which cannot be jailed,

Beautiful words which cannot be tortured

To testify against themselves in public,

Beautiful words which cannot be polluted with falsehood.”

You scattered the seeds of poetry and cared for it as a gardener.

From here, I can see its grand height,

Open the casement and touch its branches.

Oh, what is this uproar

Because you have no place in the town cemetery.

Your tomb is in the garden of poetry

Whose flowers never fade away.

Let the clergy not pray at your dead body.

Your resting place is here, under that ancient tree.

Ah, what is this uproar

It is the chime of a caravan returning the gifts of the Sultan.

I do not want your sixty thousand golden dirhams.

I do not want your loads of indigo, musk and amber.

I am the poet’s daughter. My house is here.

I stay home in memory of my father

Alongside his pampered cat

Rubbing herself on my leg.

I will remain the lonely bride of poetry.

* Ferdowsi, the eleventh-century Persian poet who composed the Iranian national epic, The Shahnameh. It is said that when Sultan’s  promised gift for his masterpiece reached a gate of the city of Tus, Ferdowsi’s coffin was being carried out from the other gate.